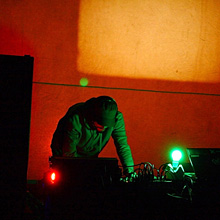 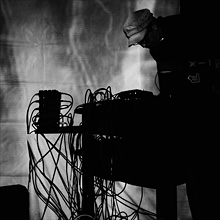 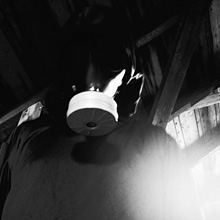 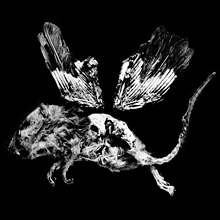 Joshua Booth holds an MA in composition at Rutgers University, Mason Gross and had performances and installations exhibited in the US and internationally. He also worked as a coproducer/cowriter with the group Dälek on Ipecac Recordings.

:>PI)I(NYGT^T$E$W#@! is Josh's new project. These works were generated by a compositional system he is developing in Max/MSP. Each work has two ‘synths’: 1. bass 2. everything else. To simplify matters even more, the synths are activated in parallel by the same rhythm sequence. Polyphonic complexity is achieved instead by automating various other musical parameters (e.g., pitch, harmonics, flange, adsr, etc.) under a multi-temporal control system that sequences input recursively. A musical form is created where every successive recursion is a higher level sequence of events and each event is a composite made up of a lower level sequence of events. The system’s functionality thus naturally destabilizes formal identities. The dialectic in these works is the rupture and rumble between actualization and annihilation.

Ondrej Gasek aka Aleff is a Czech producer which creates music oscillating between downtempo, ambient techno and industrial. Recently he also extended his production into the field of scenic music for films.

His album Selected Punishments in its own way illustrates the human rudeness and intoxicating astray on the paths of inner human conscience. It continues his industrial electronics concept and closes the circle of one decade of Aleff's work.

Founded in 1989 by Dieter Mauson and Siegmar Fricke. Until 1994 DSIP produced around 25 cassettes, published on various tape-labels all around the world and on the privately run DSIP cassette label. The music was recorded with electronic equipment on analogue tape recorders and cassette decks in their own homestudios in Hamburg, Mainz and Wilhelmshaven / Germany. DSIP exclusively concentrated on the realisation of experimental and subtle soundtracks which can be described as mind-cinema of the subconscious. The stages of sleep + phenomena of dreams have been musically explored in an idiosyncratic sound-approach. In 1994, DSIP stopped and has subsequently become a legend within the electronic scene worldwide. Nineteen years later, the project has been reactivated.

Fernando Laub (aka flaub) is a composer and visual artist mainly orientated to avant-garde, experimental and electroacoustic music. With the aim of compiling sonic substance and creating new devices from old industrial machines and recycled scrap, he spent several years living into an abandoned factory reconditioned as a sound laboratory. Besides those post-industrial quests he use to travel around the world documenting sonic and visual material. Combining all that stuff with the research of new synthesis methods, his music not only describes pictures, it will transport you to a sort of surreal and sci-fi scenarios, images that are quite difficult to describe.

Flavigula wavers in crepuscular zones, modulating among ripples and maelstroms, within spectra of snow and hailstones. Neither she makes delineations among the pleasing and unsightly, nor distinctions within the crystalline, shifting phase. Bounding in abstract landscapes, she thrives.

The sound alchemy of music project Foma is based on delicate layering of analog and digital sounds – often coloured to the darker tones. Project Foma was established in Hradec Králové (CZ) by Jiří Tilgner and David Rambousek. Their debut EP Open In Dark Room Only is now ready as a new Ressonus release.

Audio-visual project, initiated by motion designer Evaldas Jucevicius from Lithuania. His exploration in sounds and visuals, driven by intuitive experiments with software and composition takes you to another space with its own rules.

Electronic Music producer Hypercube (born Rodrigo Passannanti) debuted with a full-length album Earobics in 1996 on Hypnotic / Cleopatra US label known for top acts like FSOL, Loop Guru and many more. Since then Hypercube has been producing and releasing numerous recordings under different names among labels such as Blue Room (UK), Klang Galerie (Austria), Nova Tek (Germany), Criminal Records (UK), SPV (Poland), Nova Zembla (Belgium) etc. including live gigs and a long term collaboration with producer Andy Hughes (former member of The Orb). Hypercube music focuses on experimentation with extensive use of software effect plugins, audio editors and sound processors within the computer environment.

The katsa.theo audio-visual project, backed by the audio collagist Jiří Tilgner, grows mostly from the electro-industrial roots naturally spiced with downtempo, musique concrète and even dubstep features. His current record Porto sums up the cooperation with the singer Milli Janatková. The contrast between her dreamy voice singing Portuguese lyrics and the raw musical background moves the project towards the realm of abstract pop.

Ian Fleming is an Irish-born composer of electronic music. As Lunacybot, Ian produces a variety of styles ranging from electroacoustic pieces, ambient electronica, glitch and techno. In March 2013, he had a tape piece premiered in the National Concert Hall, Dublin, as part of the Contemporary Music Centre's New Music Week. Since then, he has made his debut as a live performer, opening the inaugural Sonic Arts Waterford festival. He is regularly featured on Lyric FM's award-winning show Nova, Ireland's national programme for contemporary music.

The music project Selectone has been set up by David Rambousek in Hradec Králové (CZ) in 2004. Since the beginning, his distinctive sound and sincerely experimental approach leaves him out of all clearly defined genres. Electronic music, ambient and minimalism provide the basic framework for the sonic experiments, in which Selectone seeks and finds his unique forms of music expression.

Sensus is an experimental project of Radek Charvát from Cheb (Czech Republic), which describes his music in his words as "sound flows" or "unidentifiable sound objects". His methods are based mainly on substantial manipulations of sounds and unusual combinations. A blend of natural – artificial, real – virtual, instrumental – mental... results in impressive pieces with dark and alarming atmosphere.

An American artist which stays strictly in anonymity and produces experimental electronic music. His album AM, released on Ressonus Records, is stunning industrial / ambient techno release, loosely inspired by Harlan Ellison's short story I Have No Mouth and I Must Scream.